Because there has been very little written about Canton discussing its many forms, the world of collectors-dealers-advertisers-auctioneers have developed multiple names for the same forms. We hope to clear up some of the confusion by not only adopting the most commonly used appellations but also by describing most forms by their shape and/or the name in standard use. In our Canton Museum Galleries we list some name variations for each object but not completely incorrect nomenclature we have seen.

Our blue and white Canton pattern is often confused with other blue and white designs: Nanking, Fitzhugh, generic export porcelain. Canton has the teahouse with scholar, bridge (no figure thereon), water, trees, birds and a rain cloud border.  Nanking is a very similar pattern but replaces the rain cloud border with a geometric, lattice like border with a spearhead design (also called daggers & dots) and there is a figure on the bridge. The decoration is often more finely done than on Canton. Very rarely a piece of Nanking is found in green. Fitzhugh has a 4 panel design each with flowers and a central medallion. Fitzhugh was produced in several colors but blue and white is the most common. Blue & white Export generally refers to pieces that do not fit into the 3 patterns just discussed. Occasionally Canton is missing one of its basic elements like the rain cloud border or it might have a figure on the bridge with a rain cloud border. Three “mixed pattern” pieces with deviations are shown in the Mixed Pattern Gallery and two are very rare. Below, left to right is an early simply decorated Canton luncheon plate, a Nanking luncheon plate (note the tiny figure on the bridge) and a Fitzhugh leaf dish. The second picture below shows a large finely decorated Canton Bulbous Vase on the left and a Fitzhugh vase on the right.

In the All Canton Forms Gallery you will often see a Campbell’s Soup can to give some size perspective to the forms it is compared with. The can is 4″ tall and 2 5/8″ in diameter. 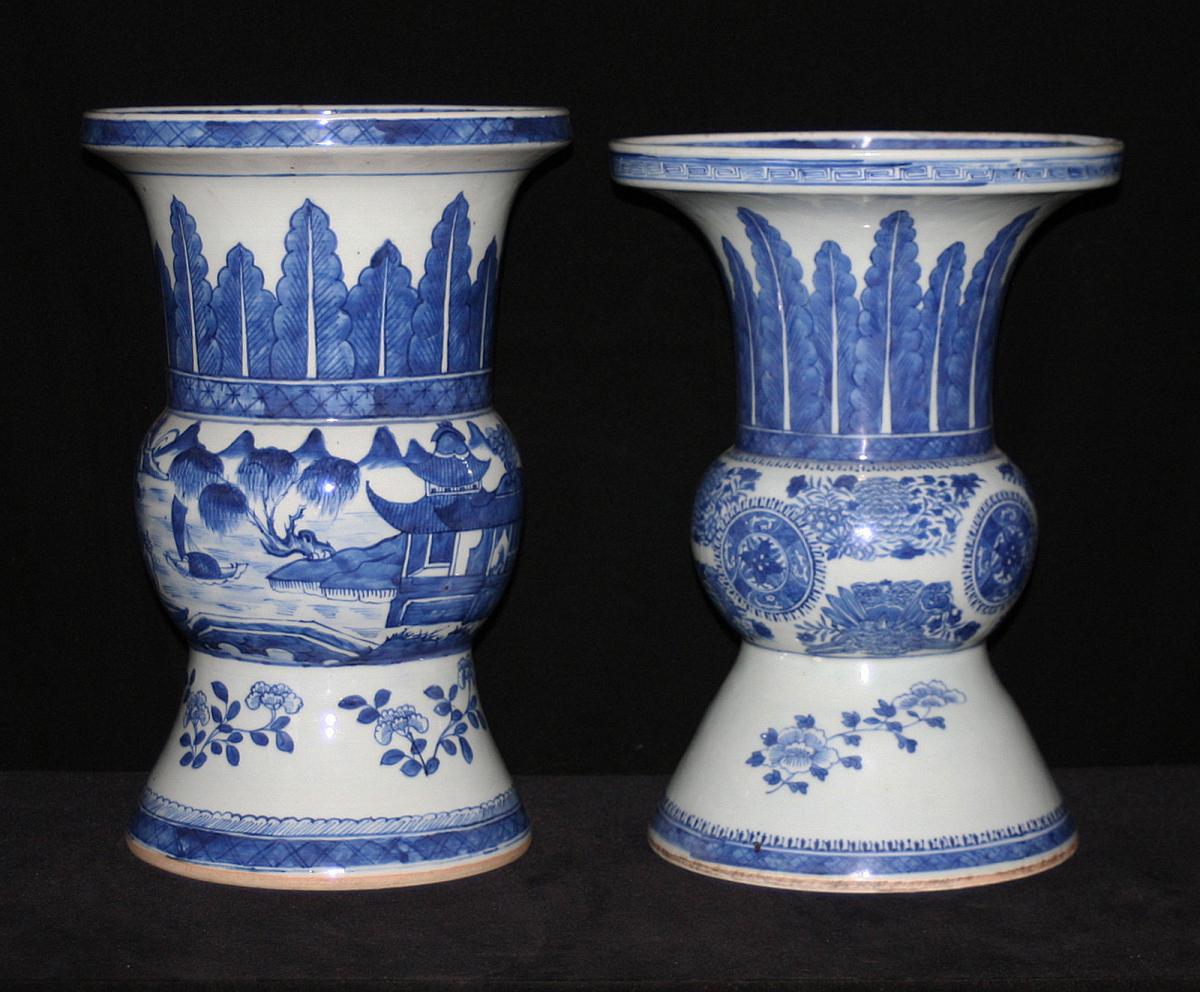 A word about price estimates given for the following Canton forms.  First, an assumption is made that the item is in near perfect condition, i.e. there are no glaze frits, scratches, chips, cracks, repairs, incorrect tops or stands, missing parts and the cobalt blue is neither very light or very dark. Secondly, estimates do not take into consideration auction commissions, sales taxes or shipping expenses. Thirdly, purchasers should be aware that dealers who specialize in Chinese export porcelain generally ask higher prices for items than one might find on eBay, in dealer centers, or small antique shops.  You are paying extra for their expertise and honesty and if they do shows the high overhead they incur.  That said, we give price ranges for the forms based on their rarity. When purchasing pieces, if they are not in perfect condition, you should deduct small amounts for frits, scratching, small chips.  Small cracks, minor and well done repairs call for a medium size deduction. If the piece has through or star cracks, large chips, poor repairs or is missing its top or stand, a major reduction is in order. Buyers should realize that repairing Canton or trying to find replacement tops for major pieces is both quite expensive and hard to do. Often repairs on common forms will cost more than a piece is worth and you will still have a repaired piece.  Generally, it only pays to repair the scarcer forms. Of course, if an item has sentimental value then you might wish to have repairs done. Also, damaged pieces may just be used for display and not be bought as an investment or for practical use.

It is with some trepidation that we give price estimates and rarity ratings as there will always be differences of opinion among buyers and sellers, dealers and auctioneers. We just hope that our estimates will be of some help to our visitors.