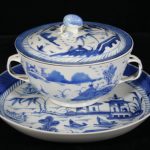 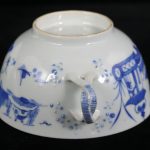 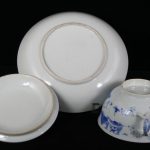 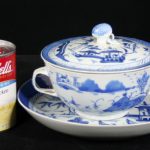 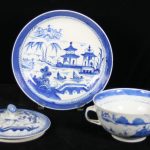 Description: This is a large, double twisted handled, covered Oyster Soup Bowl with a berry knob and stand. It was made in the late 19th century into the 20th century. All 3 pieces have the straight line borders which indicates its late manufacture. Unusual for Canton are the 5 dot bump clusters that suround the handles (I count 50 dots per handle, see last picture for closeup). Also note that although it it has twisted handles and the berry knob which would point to an early date, the pieces are made of thin delicate porcelain and the decoration is poor. Besides the borders, the tea house is elementary and the trees have morphed into what Schiffer calls: “…giant ferns”.

Despite its late manufacture, Oyster bowls are quite hard to find. As usual, any 3 piece Canton form where all its componets are desired to be perfect makes collecting harder. Lacking any one of the components affects the value considerably.

Jane Wilson pictures the Oyster bowl on page 28 of her 1977 booklet and she mistakenly calls the berry knob an “oyster”. Herbert Schiffer has two examples on page 88 of his 1975 book.