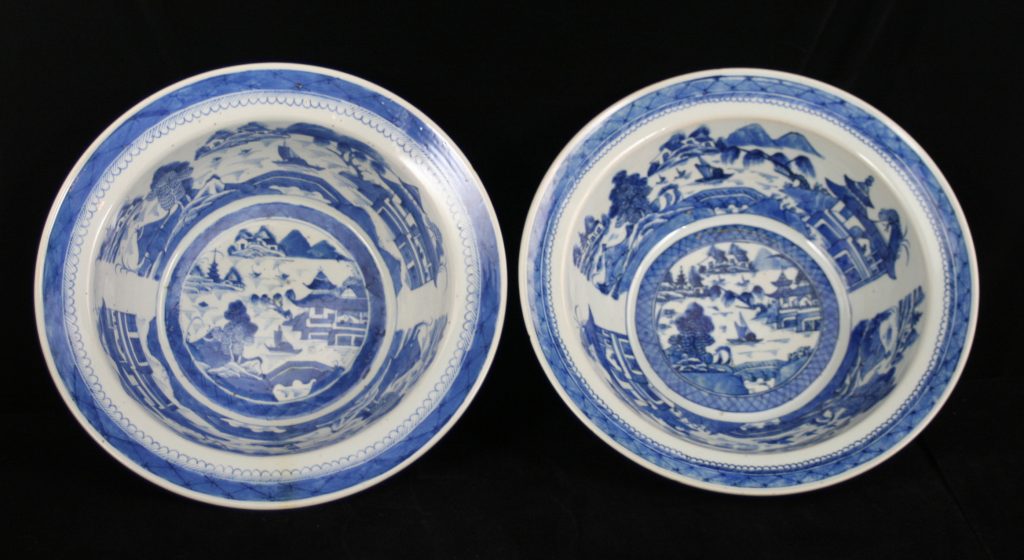 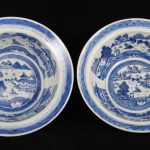 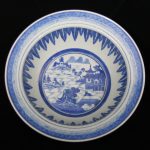 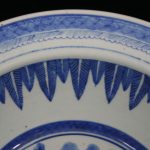 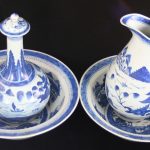 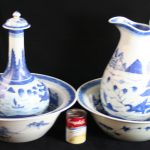 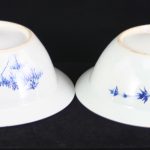 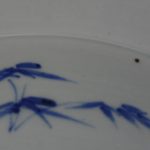 Description:  Wash Bowls are a large 16″ in diameter and a deep 5+” with 1 3/4+” slanted lips and they can hold 1 1/2 gallons of water. They served in the bedroom to provide a place to wash up and refresh ones self. Often the bowls fitted into wash stands that had round holes in their tops and the wide lips held them in place. The wash stands sometimes had railings on the sides that held wash cloths and small towels. A large Water Bottle (left) with a top or a Water Pitcher (right) would be filled with water and placed in the bowl until used. See pictures of these two objects that could be used interchangeably, they will described and shown on separate pages.

The two bowls pictured together are fully decorated on the insides with two Canton scenes and one in the bottom. The rims have the rain cloud border. Although the outsides had plenty of decorative room, they only had three bamboo leaf groupings because when the bowls were in the wash stands the outsides would not be visible.

The third bowl shown in a separate picture is decorated differently. It does have the usual rain cloud border on the rim but, in place of the two Canton scenes around the insides of the bowl there are spiky Acanthus leaves pointing downward to a Canton scene on the bottom. These are the same Acanthus leaves that appear on Canton water bottles. Also, the bamboo leaves are smaller than on the other two bowls (see last picture).

A wash bowl is pictured in Jane WIlson’s 1977 booklet on page 26 and it contains a large pitcher. Herbert Schiffer has one with a pitcher on page 68 of his book and a Fitzhugh bowl with a water bottle is shown on page 66.

A wash bowl alone is quite rare and when accompanied by a pitcher or water bottle they become a very rare and expensive set.