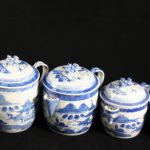 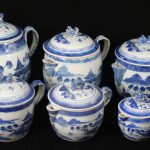 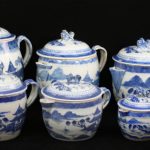 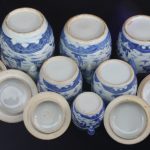 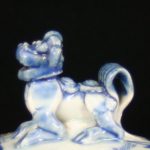 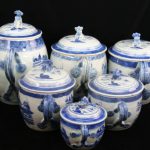 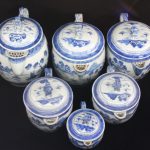 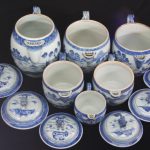 Description:  We have divided the Cider Jugs/Flagons into three categories: the tall ones have two categories, 1) the no spout cover jugs 2) the spout coverd jugs and 3) the squat jugs that are discussed here. 6 shorter squat ones are shown on this page. Although not as majestic as their taller brothers they also have very nice detail. Their color is a lighter blue. They do not have the elaborate twisted handles and their attachments. But, the Foo Dogs (see last picture) are considerably larger (this one 1 1/2″ tall) and very well crafted even on the smallest jug. Note: the Foo Dogs always face the mountains but on the tall jugs they face the sampans. These 6 jugs range from 5 3/4″ tall to 10 1/4″ tall.

All bottoms are glazed. The spouts have an upward thrust and there is a strainer in each. The largest shown here holds 3 quarts and the smallest about 1/3 of a quart. Herbert Schiffer said jugs were probably used for punch or mulled cider and he had seen the squat and tall jugs in sizes from 3 1/2″ to 12″ plus. These are a very much in demand Canton form.

Note: the largest jug here is not really squat but it is not slender like the tall jugs. Also, it is the only one with a rain cloud border on the jug itself as well as on the top.