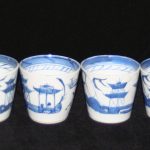 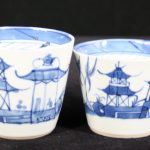 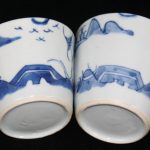 Description:  These simple cups have been generally called “Custard Cups” over the years. However, Herbert Schiffer called them “Beakers-Mugs” and shows a pair of them on page 129 of his 1975 book.  We prefer to call them custard cups as beakers are generally associated with laboratories and Canton mugs are straight sided. Custard cups are tapered, do not have handles, have straight line borders inside, are thin, delicate and translucent. The bottoms are glazed. The cups are of late 19th Century into the 20th Century manufacture. The decoration is poor. Besides the straight line borders, the tea houses are elementary and the usual early Canton trees have morphed into what Schiffer calls: “…giant ferns”.