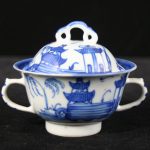 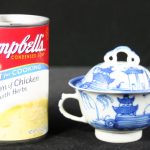 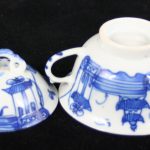 Description: This is a very unusual covered cup which we call a demitasse cup because of its small size. It has 2 fairly plain loop handles and a very unusual knob that we have never seen before. The knob has 3 holes in an arched loop. It is of late 19th century into the 20th century manufacture. The two pieces have straight line borders which indicate their late manufacture. The pieces are made of thin delicate porcelain and the decoration is poor. Besides the borders, the tea houses are elementary and the usual early Canton trees have morphed into what Schiffer calls: “…giant ferns”.

The cover with its strange knob is easy to pick up and it acts to keep the contents warm.

As usual, a 2 piece Canton form where one of its components is missing would greatly affect the value of this very rare form. We have never seen this cup & cover before.