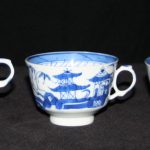 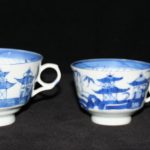 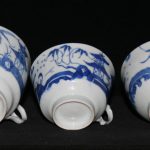 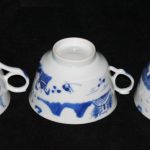 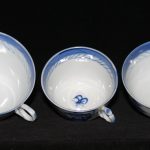 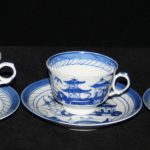 Description: Canton Cups and their accompanying Saucers make up a confusing world in defining the many variations/sizes to be found for each. Accordingly, they will be found in separate listings. We will try not to differentiate between coffee, chocolate and tea cups or straight sided cans but will separate out demitasse cups. The Chinese did not have handles on their cups but for export they added them.

The three tea cups shown here are slightly different from each other in form but each are distinguished by their “two hole handles” and tapered or rounded sides. They all have straight line borders, glazed bottoms and pedestal bases.

The middle cup is less taller at 2 1/4″ but its diameter is much smaller at 3 1/4″ and might be considered a demitasse cup.

The cup on the right is the shortest at 2 1/8″ tall and its diameter is 3 7/8″ and considered a tea cup. Its shape is squater and the sides more rounded than the others.