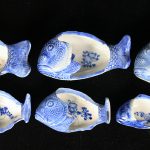 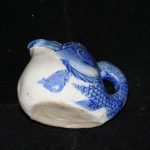 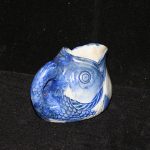 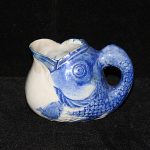 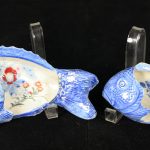 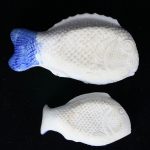 Description: Fish are one of the forms that many Canton collectors have in their collections. Of course, they are not in the Canton pattern and we are not even sure they are Chinese. Many people think they are Japanese. In any event, here is a selection of 7 fish. Even their use is in question. Were they sauce and condiment dishes or for fish bones. One theory is that they were for chop sticks, the stick’s ends were placed inside and the V tails held the rest of the sticks. Hopefully they were not ash trays!

They range in size from 4 1/2″ long to 7 3/8″ long. The largest one we have seen has gold highlights on the scales and colorful flowers inside. The scales of all the fish are molded on the top sides and especially on the bottom sides. The smaller fish are fairly common but the largest with gilt is very scarce.

Recently seen for the first time, is a second type of fish closely related to the more common fish described above. This single fish shown in the last 3 pictures is smaller but has the same moulded fish scales and seems to have been made by the same people. This example has a useful handle and the mouth is turned upwards. Might this be a small cream pitcher or tooth pick holder? It has a 2 5/8″ diameter and is 3″ high. A rare and very interesting addition to the “Non-Canton” Canton Gallery.