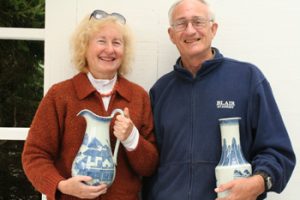 Hello!  We are Hoby and Nancy Van Deusen, curators of the Canton China Virtual Museum.

Hoby has always had a collector’s bug throughout his entire life. He became interested in Canton in the early 1960s after graduating from Dartmouth College and the start of his NYC career in Trust and Estate banking. The reasons Hoby and Nancy collect Canton are because it is beautiful with its blue and white colors and its motif of a river, a bridge, willows and a scholar in a pagoda. As collectors, they like that Canton comes in many different forms. They also like that Canton has many practical every day uses. It is believed that it came into use in America as early as 1784 when the first clipper ship, Empress of China made its first trip. One of the first well known Canton owners was George Washington.

Hoby’s first Canton purchase was on February 25, 1964. It was an 8 1/2” soup bowl bought in NYC for $15. Purchases grew modestly in the next few years and were practical pieces like plates, platters and bowls. The first significant buy was a cider flagon in 1965 from a dealer for $125.

In 1977, Hoby and Nancy were married. She has a strong interest in American History and collecting Canton became a mutual interest that they have pursued over the years together. Like most collectors, we have also bought Canton to sell as a business.

We would like to take this opportunity to thank Julie Lindberg, our longtime friend and Canton expert, for helping us with suggestions to develop the Canton China Virtual Museum. Julie has encouraged us over the years to make this Canton resource available to all.